The Reality of Dental Caries 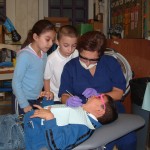 Community-based Strategies to Save Money

Hope for the Future

Many Americans now enjoy markedly better oral health than did their parents. However, certain segments of the population (e.g., those who are poor, who are members of racial or ethnic minority groups, or who are elderly) still have severe dental decay, much of which remains untreated. Healthy People 2010 objectives seek to eliminate these disparities, so that all Americans receive the benefits of good oral health. Community-based programs such as community water fluoridation and school-based dental sealant programs are a particularly effective and cost-savings way to help achieve this goal. For example, increasing the percentage of children at high risk for tooth decay who participate in school sealant programs to 50 % would prevent more than half of the caries that these children would otherwise have and save public health dollars.

The above information was obtained from the Centers for Disease Control and Prevention at: http://www.cdc.gov/OralHealth/publications/factsheets/dental_caries.htm.